The Divinity of Gloria, In Excelsis Deo

"Gloria" was commissioned by Erik J Heinrich. Erik was inspired by the pictures of several Bellucci all-time best-selling African Blackwood Guitars particularly the Model TZIN which was Erik's favorite example and main inspiration going into the creation of Gloria and after exchanging countless emails with me, we came up with the "final list of specs" of this first time jewel guitar. My luthiers had never been pushed to such high demands of construction and we had to implement customizations and combinations of customizations like we never did before. Erik shares with me a deep love for Our Lord and the acronym SDG on the violin tie had to be present. SDG stands for Soli Deo Gloria, All the Glory to God, which was J.S. Bach’s way of signing and dedicating his work to Our Lord. I have learned to offer my daily work to the Lord since my youth and "Gloria" is definitely the Crowning Achievement thus far during a life long Enterprise. The combination of first time improvements and challenges makes "Gloria" one of the best  Bellucci Guitars to date simply because it took the best effort of my whole team of luthiers during a span of six months upon completion. I must thank Erik for the inspiration and continued support in the creation of a Masterpiece of such unprecedented grandeur.  The number of Custom and unique features on "Gloria" is simply staggering. Custom Inlays were commissioned with 6 Months of anticipation. Erik wanted her to be The Crown Custom Guitar in this Special Crown Custom Limited Edition SDG Signature Series, and We designed a Crown to decorate the headstock and a glorious SDG acronym in stylized characters on the Violin Tie. The Pearl and abalone work on "Gloria" took over 200 hours of work to complete. Gloria is the first classical guitar where diamond position markers with gold settings were successfully installed adding one more stunning achievement to this "Queen of Guitars". Add the Radiused Saddle that feels tremendously natural and accompanies the radiuses shape of the fingerboard and Nut. 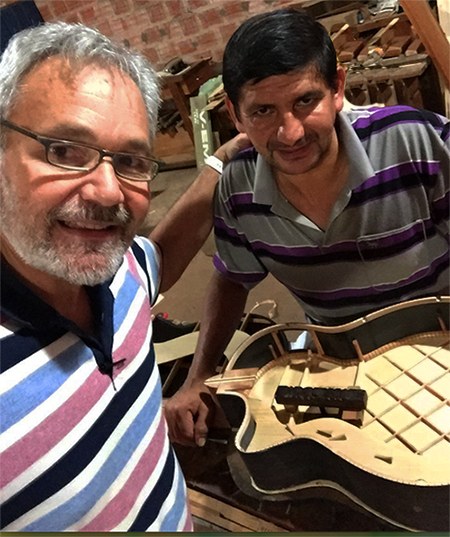 In the image above I am depicted with Gloria's Master builder: Domingo during construction on late May 2018. The type of construction we opted for is also the crowning of having built over 1,600 Instruments and having experimented with a vast variety of bracings and sound production features. Gloria Carried an all-wood Lattice Bracing and  a "Contreras Style" all wood Double top. The Contreras Double top was originally designed to act as the alm in a violin but delivers quite a rich list of goodies like a "thicker" sound, thus a more malleable palette of sound, augments sustain and takes care of all possible wolf notes leaving the sound of the instrument as pure as can be. The addition of a Lute Style Sound-Port allows Gloria to project like a violin and the armrest and Violin tie allow for a full vibration of the top that leaves you speechless as you pluck the strings. The Elevated Fingerboard makes her so much more a close relative of the violin family and allows the top to vibrate beyond the norm for a classical guitar. She carries 20 full frets thus making it a dream come true to play Barrios' "Sueño en la Floresta" and an additional partial 21st fret to extend the guitar into a C# making Gloria capable of playing "guitar extravaganzas!". The sound she produced as I made the recordings is amazing. Even more so when I know that she will grow in sound about 30 more decibels in the next 60 days. I started the demo videos series playing Asturias and I was immediately struck by her deep and penetrating bass that seemed to last forever. As I needed Gloria to become more aggressive, she responded gloriously and I could feel her body vibrate with every strumming of my right hand. Bach felt heavenly, with the pedal D lasting an eternity and pushing ever harder thanks to the double top. Clarity in every musical phrase and the most amazing separation of voices. Playability was put to the test with Cavatina where I could play through the demanding opening barre chords with ease and fluidity. The Onboard 4-band EQ by Artec makes her an instrument for all types of genres and musical scenarios. This Masterpiece was built by Domingo, an artist and master luthier who put his whole self to the service of God in the creative process of what I consider one of all timeliest guitars EVER built. Domingo is the luthier that has worked with me from the very beginning of Bellucci Guitars since 2004 and he has undoubtedly produced the most Epic Bellucci Guitars.  S.D.G.