Overstreet/Schiltz, "When You Say Nothing at All" 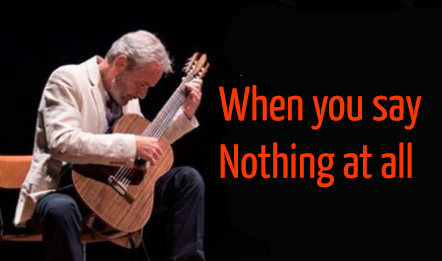 "When You Say Nothing at All" is a country song written by Paul Overstreet and Don Schlitz. It is among the best-known hit songs for three different performers: Keith Whitley, who took it to the top of the Billboard Hot Country Singles chart on December 24, 1988; Alison Krauss, whose version was her first solo top-10 country hit in 1995; and Irish pop singer Ronan Keating, whose version was his first solo single and a chart-topper in the United Kingdom and Ireland in 1999.

Renato Bellucci plays: "When you say Nothing at All"